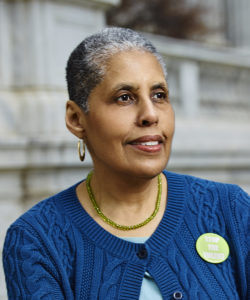 Barbara Smith is an author, activist, and independent scholar who has played a groundbreaking role in opening up a national cultural and political dialogue about the intersections of race, class, sexuality, and gender. She was among the first to define an African American women’s literary tradition and to build Black women’s studies and Black feminism in the United States. She has been politically active in many movements for social justice since the 1960s.

She was cofounder and publisher until 1995 of Kitchen Table: Women of Color Press, the first U. S. publisher for women of color. She resides in Albany, New York and served two terms as a member of the Albany Common Council from 2006 to 2013. From 2014 to 2017 she served as the Special Community Projects Coordinator for the City of Albany helping to implement the Equity Agenda.