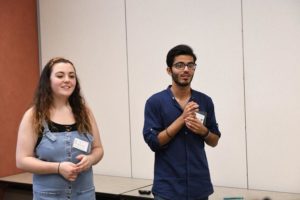 Natalie Mandel, a rising ninth-grader at Brown School, last year convinced her principal to adopt Meatless Mondays, turning the cafeteria’s menu all vegetarian for the first day of each week.

It wasn’t even that hard: She set up a meeting and made her case, arguing that going meatless on Mondays would be a way to introduce students to eating vegetarian and might save the school some money. A month later, she got her way.

“It was easier than I thought it would be,” she said.

As an eighth-grader at Oneida Middle School two years ago, Leah Russo helped organize a walkout. When high-schoolers across the region and the country walked out to demonstrate against gun violence in schools, she wanted to do the same at her middle school. The young student organizers walked out of class and staged a march in the hallways of the school. Read more on the Daily Gazette site.